Mycology, the study of mushrooms, is an increasingly popular pastime in British Columbia.  How does one get started?

Having a copy of Mushrooms of BC, a BC-specific guide to the major mushrooms found in the province, is a good beginning. We have reduced the jargon typically found in mushroom guides and provided large, diagnostic pictures. But no matter how accessible it is, a book is still a book, and most people find they need more than just a printed guide to really learn how to recognize and use BC mushrooms.

The best approach, we have found, is to locate others who are already using mushrooms. This might mean joining a mushroom club. These organizations often have informative presentations at their meetings and regularly schedule outings for their members. In Victoria, connect with SVIMS, the South Vancouver Island Mycological Society. In Vancouver, the place to meet up is VMS, the Vancouver Mycological Society. The North American Mycological Association (NAMA) is a group of affiliated mushroom clubs. On their website they have a list of affiliated clubs that includes local contact information.

If there is no mushroom club in your area, check with your local natural history society–these societies often have subgroups that are interested in fungi. On the BC Nature website is a guide to over 50 of these clubs.

Some mushroom activities are sponsored by groups that aren’t mycology or natural history groups. Daniel Mosquin at the University of British Columbia Botanical Garden maintains a web site that lists almost all of the fungal events in in Southwestern BC.

No single mushroom guide fits every need. As you get on with the study of mushrooms, you will probably want to acquire and consult other guides.

We know of three self-published guides with significant BC coverage that are available (though they can sometimes be hard to track down). One of our favourite regional guides is Mushrooms to Look for in the Kootenays by Doug McBride and Tyson Ehlers. Doug and Tyson bring valuable insights from southeastern BC to this book (many of Tyson’s excellent photographs appear in Mushrooms of BC). Another excellent BC regional guide is The Outer Spores: Mushrooms of Haida Gwaii by Paul Kroeger, Bryce Kendrick, Oluna Ceska, and Christine Roberts. Common Mushrooms of the Northwest, by BC author and photographer Duane Sept, is a small book, but its coverage centres on BC.

In addition, there are other useful and entertaining guides for western North America that are published by commercial publishers and are currently in print. They are written by mycologists from California, Oregon, or Washington and so contain some mushroom species that don’t make it this far north and omit some northern species that don’t make it far enough south. Also, their habitat information—especially where and when mushrooms appear—can be difficult to transfer to a BC setting. 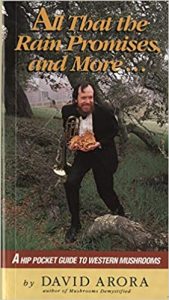 The ones most widely consulted by BC students of mushrooms, in our experience, are David Arora’s massive (almost a thousand pages!) and authoritative Mushrooms Demystified, first published in 1979, and its smaller field companion, All That the Rain Promises, which appeared in 1991. These are now marketed by Penguin Random House Canada and can be found in many BC bookstores. The Arora guides are not only informative—they are immensely fun to read. Another useful guide for our area is Steve Trudell and Joe Ammirati’s Mushrooms of the Pacific Northwest, especially valuable for its insight into the inner workings of mycology and mycologists. Timber Press published it. A new edition of the book is in preparation. Noah Siegel and Christian Schwarz’s masterful Mushrooms of the Redwood Coast focuses on California coastal habitats, but it surveys so many species that its coverage has significant overlap with BC mushrooms. Like Arora’s books, it was done by Ten Speed Press and is marketed in Canada by Penguin. Teresa Marrone and Drew Parker’s recently issued Mushrooms of the Northwest, a book for smaller pockets, manages to fit into its small dimensions a large number of beautiful diagnostic photographs. Fans of watercolours will appreciate Mushrooms of Western Canada by Alberta-based Helene Schalkwijk-Barendsen, published by Lone Pine. Margaret McKenny and Daniel E. Stuntz’s The New Savory Wild Mushroom, by Greystone Books, is somewhat dated, but it has been helpfully updated by Joe Ammirati. One of the newest additions to the stable of Pacific Northwest guides is Michael Beug’s Mushrooms of Cascadia: An Illustrated Key. It is published by Paul Stamets’ Fungi Perfecti. (Currently, Michael’s volume can be hard to acquire in Canada–some copies may be available at the Swan Lake Nature Stanctuary gift shop.)

In addition to these field guides, there are a number of more technical references available for specific groups of mushrooms. In Mushrooms of BC, we note some of these group-specific works in the introductions to the various species groups. Also, many BC readers enjoy and subscribe to Fungi Magazine, edited by Britt Bunyard.

There are many resources online for mushroom students. Most are not specific to BC, but there are four that are based in BC and have important coverage of provincial mushrooms. The MycoMatch app, created by a committee that includes Ian Gibson and Danny Miller. MycoMatch allows users to search for mushrooms using an array of features, rather than forcing the user to wade through a binary key. Ian also maintains a website with identification keys produced by the Pacific Northwest Key Council. The third resource is the extensive mushroom component of E-Flora BC. The fourth resource is the Mushrooms Up! Edible and Poisonous Species of Coastal BC and the Pacific Northwest website hosted at the University of British Columbia. The site contents were recently transformed into a book called Mushrooms Up!

Mushroom people also make use of two online databases where they can post their observations and get comments from experts. One is Mushroom Observer. The other is iNaturalist, which includes fungi but ranges over all organism groups. The iNaturalist app has an AI driven database of millions of pictures that can often recognize species in the field. (This feature is available as a standalone app on smartphones and tablets under the name Seek.) Several Facebook groups, each with many thousands of members, address the specific interests of BC mushroomers, such as Vancouver Island Mushroom Identification & Info Group, the South Vancouver Island Mycological Society (SVIMS), and the Pacific Northwest Mushroom Identification Forum.

Many courses on BC fungal identification are offered by individuals and through various institutions. For listing, see the Events tab on this site and the listings posted on the UBC Gardens bulletin board. An online course at the University of Victoria, Introduction to Mycology, which was developed by mycologists and SVIMS members Shannon Berch and Bryce Kendrick, recently became available.