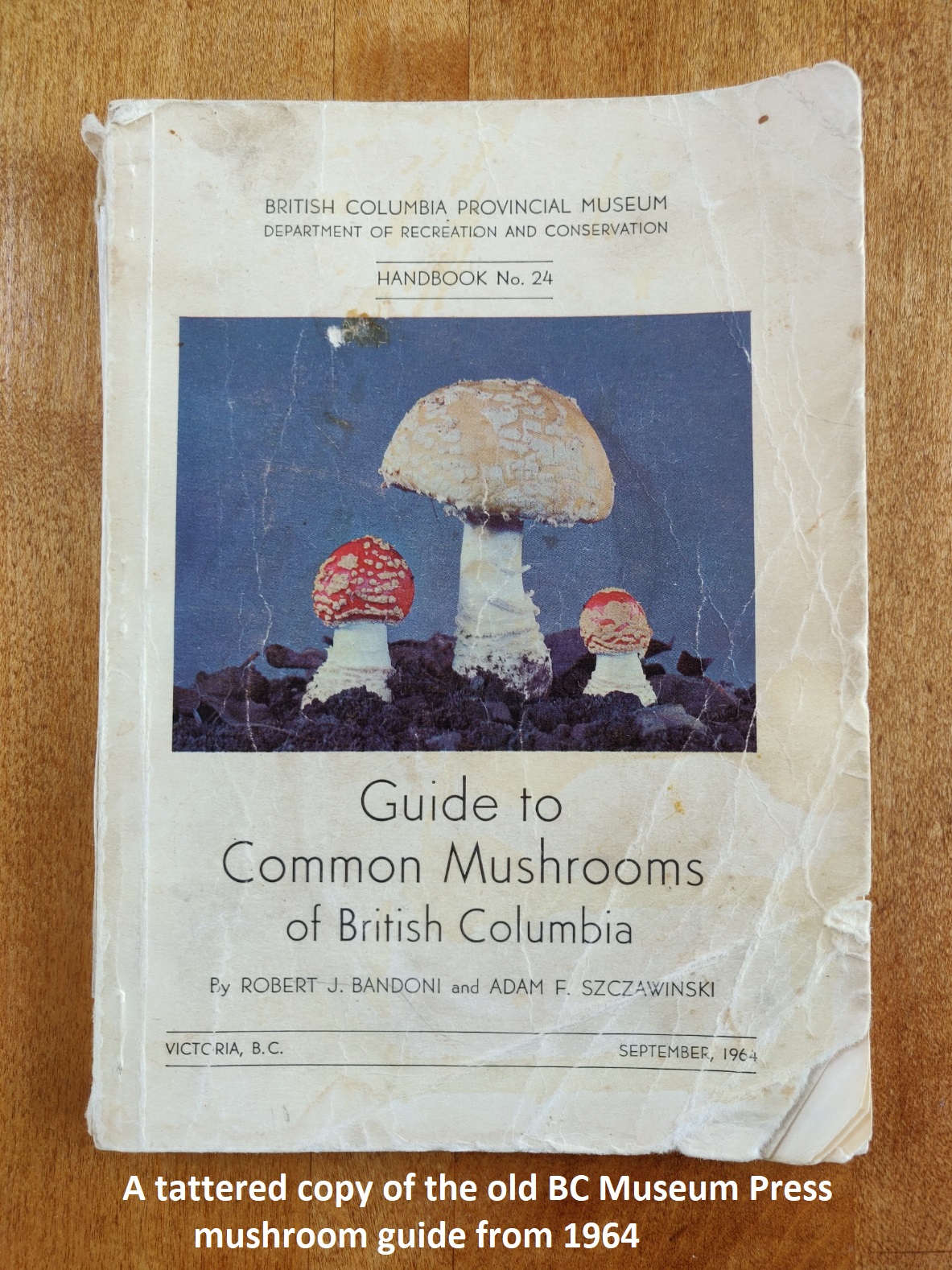 For years, BC mushroom enthusiasts have lamented the lack of a current mushroom guide that was specific to BC and that covered a wide swath of BC’s most common mushrooms. Conversations about how to remedy this absence were frequent but fruitless.  Everyone wanted one, but no one seemed to have the time or energy to produce one.

This finally changed in early 2017. The two of us–Andy MacKinnon, the author of a half-dozen natural history guides, and Kem Luther, the author of several books–found ourselves between books and ready to take on new projects.  The time for a guide to BC mushrooms, we agreed, had finally arrived.

Our initial impulse was to pull together a large team of BC mycologists and produce, over several years, some kind of ultimate reference book for BC mushrooms. We started to assemble the kernel of such a team and to make contact with potential publishers. Our discussions with publishers made us realize that the project was larger than the publishing resources available. We learned, though, that there might be a place for a more modest field guide, one directed at beginners. Royal BC Museum Books offered to let us do a volume on mushrooms in their popular Handbooks series. Museum Books had a strong claim to be the book’s publisher–they had twice before produced a BC mushroom guide. The most recent one (see the picture on this page) was over 40 years old and no longer in print.  We agreed to do the guide.

After reorganizing the project around more modest goals, we started to work. Our first task was to decide which mushroom species to include in the guide. Ian Gibson, the principal author of the electronic guide “MycoMatch: Mushrooms of the Pacific Northwest,” and Shannon Berch, one of the authors of the 2017 herbarium-oriented checklist of BC mushrooms (Paul Kroeger and Shannon Berch, Macrofungus Species of British Columbia), helped us to round up fairly complete lists of the known BC mushrooms. They also helped us to narrow these down to the 350 or so that would become primary entries in the new book. The four of us, we realized, brought a southwestern BC bias to the task of choosing species for the book, so we reached out to mycologists with expertise in the BC interior species. They helped us adjust our list of species so that the guide would be useful over most of BC.

With the species list in hand, we started to generate the book text. We wanted to provide, at a minimum, detailed and accurate descriptions of the main species and to include comparisons with several hundred species that were not main entries. Royal BC Museum Books helped us with some mockups of sample pages so we would know how many other details we could include in the available space.

We committed ourselves to include, as we wrote the entries, the most recent research and technical information. Before we finished writing the descriptions, we had consulted over 500 journal articles and dozens of books.

Where the most recent research pointed toward new scientific names for fungal species, we decided to use the most recent names, even where these were at variance with BC habits. We also wanted to provide common names for each species with a main entry. Since not every species had a widely recognized common name, we invented some (and had a lot of fun doing it!).

As we completed sections of the book, we sent them to colleagues to look over and comment on.  A few of these reviewers–Paul Kroeger, Ian Gibson, Hugues Massicotte, Keith Egger, and Tyson Ehlers–looked at most of the manuscript. A large number of other mycologists reviewed sections that matched their areas of expertise.

At the same time that we were generating the text, we were searching for pictures to include in the book. We needed at least one picture for each main entry. Neither of us were serious photographers, so we didn’t have many pictures of our own to contribute. Many other people in the US Pacific Northwest and the BC mushroom communities, however, had troves of excellent pictures. We contacted them and they generously sent us what they had–some 15,000 pictures! We looked at all of these and narrowed them down to 3000 candidate photos, about 10 for each species. From these candidates, we selected the pictures that best illustrated what we wanted to show. We contacted the photographers about permission to use specific photos in the book and they graciously gave us the needed permissions. In all, we sourced book photos from about 80 people, some providing only one or two images, others providing a dozen or more photos.

The book’s introduction needed line drawings, so we made arrangements with a local illustrator, Dr. Cara Gibson, to provide us with over 50 of her excellent, scalable drawings. Her expertise in fungi made our collaboration with her an easy one. 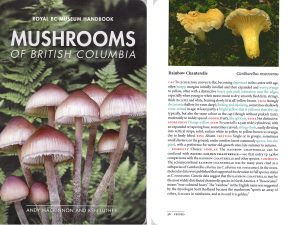 Pulling everything together occupied almost two years of intense labour. In June 2020, we finally handed over our text, pictures, and illustrations to Eve Rickert, the publisher/editor at Royal BC Museum Books. These were then sent to a copyeditor/fact checker, Grace Yaginuma, whose careful eye spotted, over the next few months, a number of inconsistencies, misspellings, and grammatical errors. From the copyeditor, the book went to a graphic designer, Jeff Werner, who put together the text and pictures for each page and produced camera-ready copy for the printers. Lana Okerlund copyedited the book and Catherine Plear created the book’s index. In June, 2021, we finally held in our hands an early–and beautiful!–copy of the printed book.